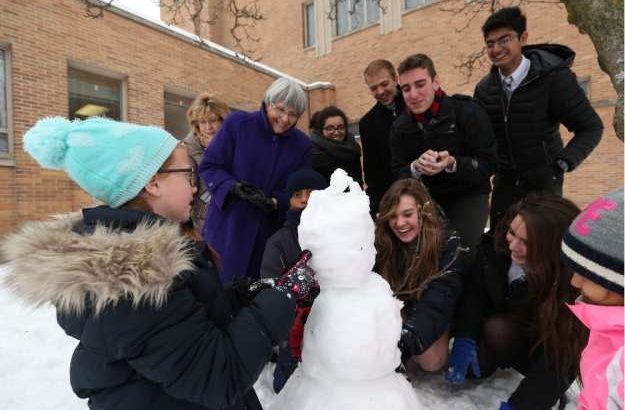 As Therese Gadoury scoured her daily emails, she saw something about a Wall of Fame and quickly hit the delete button.

Believing it was simply spam, she didn’t give it a second thought until her assistant pointed out it came from the University of Western Ontario.

The notice concerned her induction in 2016 to the university’s Don Wright Wall of Fame, which annually honours some of the music faculty’s outstanding alumni.

An acclaimed performer in her own right, Gadoury has dedicated the last 37 years to nurturing the artistic, academic and spiritual strengths of others as the founder and director of the ever-expanding Academie Ste. Cecile International School and its assorted satellite campuses.

The Wright Wall of Fame recognizes Western alumni “who have made an impact locally, nationally and internationally,” according to Betty Anne Younker, the dean of music.

Gadoury checks all those boxes although she neither wants nor relishes the attention her efforts tend to bring her way.

“The message that needs to come out loudly and clearly is that this is a project that’s beyond me,” said Gadoury, a woman of deep faith who relies on prayer as well as business acumen to guide her hand. “From the very outset this was going to be God’s will and he needed servants and hand maids to do the job.”

Gadoury points to several moments of divine inspiration that guided her through what she describes as a “spiritual journey ” and a “test of faith.”

At 27 years old, she was a sought after organist, singer and instructor, teaching students in the basement studio of her parents’ home.

A calling to open a music school and a powerful message from her late father in the form of a dream spurred her to bid on a defunct Bell telephone building on Tecumseh Road East. She invested her life savings to open the place in 1979.

“I’m thinking this building is way too big and then next thing you know I’m buying Holy Redeemer,” she said of the 30-acre property in South Windsor that had served as a teaching seminary.

By the mid-1980s, the message from above changed and Gadoury was encouraged to open a private school.

“You know how crazy this is,” she gently asked God at one point. “And all I heard was ‘Say yes, Therese, just say yes.’”

By 1993, the school opened its doors to a handful of students.

When times were tough locally and enrolment flagged, Gadoury started travelling the globe to recruit international students years before other educational institutions saw the value in this practice.

Now there are 99 international students who come from Dubai, China, Mexico, Hong Kong and Columbia and stay in residence. Another 700 come for short-term programs offering English as a second language.

Classroom sizes are small with no more than 16 at the secondary level and a dozen at the elementary level. The curriculum is faith based but open to all denominations and there’s a robust emphasis on art, music and drama.

The South Windsor campus has been expanded and renovated on numerous occasions to accommodate the latest vision.

A stand-alone elementary school opened in 2004 and now houses 165 students.

The original Holy Redeemer building has 145 secondary school students. Classrooms, labs and a gymnasium with an NBA-sized basketball court have been part of past expansions. This spring saw the opening of a FIFA artificial turf soccer field and an eight-lane track.

The latest construction phase will see the addition of a 900-seat performance hall with an expansive stage and mezzanine level. The addition will also feature a dance hall with a specialized spring floor, a kitchen and additional classrooms.

“She’s built something beautiful here, not so she can shine but so the kids can shine,” said Stephan Pelland, the secondary school principal. “When you allow kids to share their gifts that’s when they thrive.”

Dr. Alisha Gabriel graduated from Ste. Cecile in 2006 and went on to study in Ireland and become a Rhodes Scholar.

“The standards and curriculum which she set were excellent,” Gabriel wrote in her Wall of Fame nomination letter. “Her educational leadership was remarkable. She was always a selfless, tireless, hard working, inspirational, caring leader.”

Rev. Ed Perrone, of Detroit’s Assumption Grotto Church, wrote of her “uncompromising insistence on excellence in all that she does and oversees.”

“I do not claim to know all about this remarkable woman but what I do know makes me marvel,” he said.

Ann Marcotte worked side-by-side with Gadoury for some 20 years.

“She’s definitely determined,” Marcotte said. “She will always find a way to make things happen. Just when you think maybe this won’t work, it does. It’s like a bunch of little miracles.”

Gadoury, now 65, has always met a challenge head on.