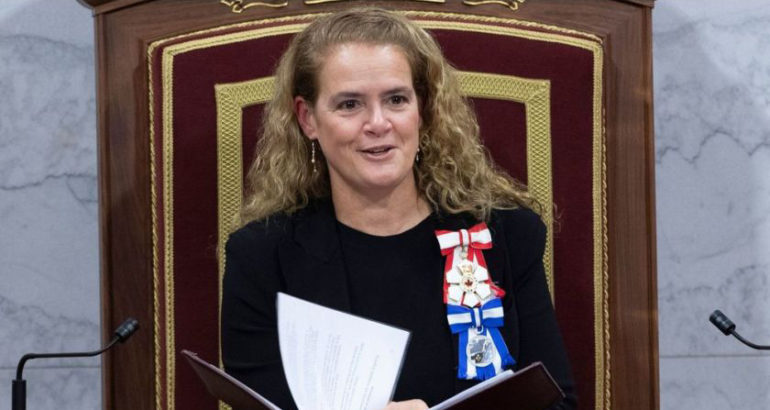 Governor General Julie Payette, seen here delivering the Speech from the Throne in December, will present the History Award for Excellence in Teaching on Jan. 20 to David Brian and Stephen Punga, two teachers from Windsor’s Academie Ste-Cecile.  SEAN KILPATRICK / POOL/AFP VIA GETTY IMAGES

A project by students at Academie Ste-Cecile to research, document and map headstones belonging primarily to settlers of African descent in Essex County has earned the two teachers who oversaw the effort a Governor General’s award.

David Brian and Stephen Punga will jointly receive the History Award for Excellence in Teaching at Rideau Hall in Ottawa, Jan. 20.

Julie Payette, the Governor General of Canada, will present the award.

Brian and Punga brought together their Grade 11 geography students and Grade 12 history students for a collaboration called the Lost Cemeteries Project.

During the course of the project, stories emerged of racism, slavery and discrimination as well as perseverance, courage, and hope for a better future.

Together, the students researched, surveyed and published an interactive map and database of the headstones. Many of the gravesites were neglected or undocumented, leading the students to investigate the historical context of the settlements and the enduring legacy of slavery, racism and discrimination against early black settlers and their descendants.

“One of the great parts of this project was the degree of collaboration between the teachers, the students, and the community,” Punga said in a media release announcing their award.

“For me, this project is the epitome of teaching and learning,” Brian added.

Brian and Punga are two of nine recipients of the Excellence in Teaching Award, chosen from twenty-five finalists. The winners will share a $2,500 prize. In addition, their school will receive a $1,000 prize.

“With this award, we celebrate the extraordinary work of teachers who outdo themselves every day to shape our adults of tomorrow,” said Janet Walker, president and CEO of Canada’s History Society.

The award is administered by Canada’s History Society with support from TD Bank.